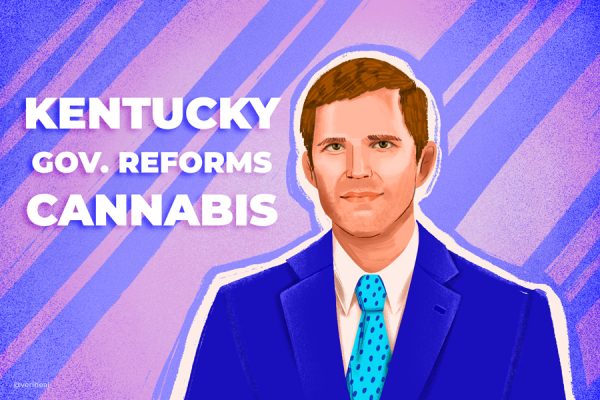 On Tuesday, Nov, 15, the governor of Kentucky inked his signature on two cannabis-related executive orders. One of those executive orders signed by Gov. Andy Beshear (Democratic Party) outlined a list of conditions that state residents must meet to access medicinal-grade cannabis starting on Jan. 1, 2023.

“Kentuckians suffering from chronic and terminal conditions are going to be able to get the treatment they need without living in fear of a misdemeanor,” Beshear said at the press conference, where two leading cabinet officials accompanied him.

As per the details of the executive order, Kentuckians who wish to obtain medical cannabis legally next year must first be diagnosed with at least one of 21 medical conditions, including terminal illness, cancer, multiple sclerosis, muscular dystrophy, and post-traumatic stress disorder (PTSD).

The governor signed another executive order to regulate product sales of the psychoactive cannabinoid delta-8 THC. Delta-8 is produced synthetically as a byproduct from federally legal, hemp-derived CBD. Due to a lack of regulations, concerns have grown regarding the safety of delta-8, which is not currently federally scheduled.

“Right now, there are no checks on how it’s packaged or sold. So we must establish a regulatory structure to ensure delta-8 is sold, packaged, and purchased safely in the Commonwealth,” Beshear explained.

This signing of the executive orders emerged weeks after the state’s Administrative Office of the Court was instructed by the governor to analyze how many Kentuckians have misdemeanor marijuana charges on their records and the possible impact of pardons.

During the press briefing, Beshear stated that patients with serious illnesses would be safeguarded against prosecution in Kentucky if they prove they bought their cannabis at a licensed, out-of-state dispensary.

However, since the governor cannot change criminal statutes or instruct police not to enforce specific laws, patients may be confronted with law enforcement action for medical cannabis possession. On the other hand, they will receive a pardon for the offense if they are lucky.

“Each person must also have a certification from a licensed healthcare provider that shows the individual has been diagnosed with at least one of 21 medical conditions, which include cancer, multiple sclerosis, post-traumatic stress disorder, muscular dystrophy, a terminal illness, and others,” the governor explained to press conference attendees. “You must keep a copy of your certification.”

The executive action that has been put forward by Beshear “will serve as a template for when the General Assembly fully legalizes medical cannabis.” People who meet certain criteria will be offered a “full, complete, and conditional pardon” under the directive, which relies on the governor’s authorization to issue clemency within the state.

“With 37 states already legalizing medical cannabis and 90% of Kentucky adults supporting it, I am doing what I can to provide access and relief to those who meet certain conditions and need it to enjoy their life without pain better,” added Beshear,

Beshear Is Criticized and Praised for Signing Executive Order

The state’s lead sponsor of medical cannabis legislation, Rep. Jason Nemes (R), disapproved of Beshear for breaching the “Rule of Law,” insisting that he “has granted himself a power that exists nowhere in the United States and finds no refuge in Kentucky’s Constitution.”

“As much as I support his effort to bring medical marijuana to Kentucky, this unprecedented power grab cannot stand,” Nemes said. “Rather than sidestep the policy-making branch and violate the Constitution, I invite him to work with us to develop a legal medical marijuana program.”

Attorney General Daniel Cameron (R) retorted to Beshear’s action with a similar point of view to Nemes. “Time and time again, the governor has attempted to bypass the policy-making authority of the General Assembly,” he said. “As always, he seems to relish ruling by decree instead of by the law. Kentucky’s General Assembly is this state’s sole and final policy-making body, and they must be allowed to have their say. We are reviewing these executive orders to determine the next steps.”

Lt. Gov. Jacqueline Coleman (D) praised the move, pointing to broad public support for medical marijuana among the veteran population. She makes a good point, with statistics from the Veterans Cannabis Project revealing that 83% of service members support legalization.

“From our veterans suffering from PTSD to cancer patients or those living with multiple sclerosis, medical cannabis can provide relief and an alternative to addictive opioids,” she said.