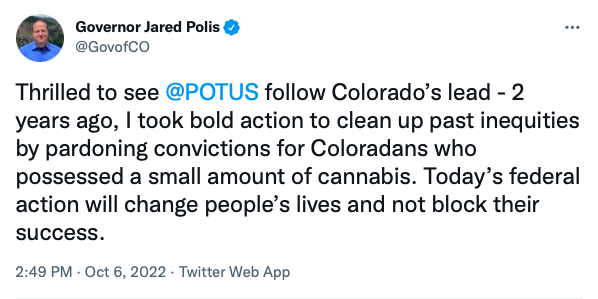 At least 6500 federal prisoners are ecstatic this week with President Biden’s perfectly timed Pardon of “of all federal convictions for simple cannabis possession”, a promise made by Biden while campaigning in 2020, and kept 1 month before midterm elections.

With just weeks left before elections, the price of gas going up again, inflation at an all time high, and Biden’s popularity at an all time low, the President’s timely announcement of the pardon and his call for a sweeping reform and reclassification of cannabis has the DCC (Department of Cannabis Control), as well as most democrats up for election or reelection, also ecstatic. And it’s a logical move, seeing as the majority of the US population favors legalization of cannabis use.

From his official Twitter account, President Biden tweeted,“ As I’ve said before, no one should be in jail just for using or possessing marijuana. Today, I’m taking steps to end our failed approach.” He continued,“ There are thousands of people who were previously convicted of simple possession who may be denied employment, housing, or educational opportunities as a result. My pardon will remove this burden.” Biden added,“ We classify marijuana at the same level as heroin—and more serious than fentanyl, it makes no sense.”

The pardons clears people who were convicted of simple possession of marijuana under federal law between 1992 and 2021.  The approximate 6500 prisoners did not include the District of Columbia, airports and national parks, which would have greatly increased the number of pardons.

Biden also announced he has ordered an expedited review of how marijuana is scheduled under federal law — a move that could change how the drug is regulated in the United States and could help guide criminal laws. This would mean taking cannabis off the Schedule 1 drug list. To this end Biden asked Health and Human Services Secretary Xavier Becerra and Attorney General Merrick Garland to “expeditiously” review how marijuana is scheduled under federal law. As a Schedule 1 drug, marijuana is currently in the same classification as heroin and LSD; Biden said,” even higher than the classification of fentanyl and methamphetamine – the drugs that are driving our overdose epidemic.”

There are a few caveats of his sweeping pardon proclamation:

The majority of US marijuana convictions are prosecuted at a state level, as a result, those convictions are not included in this Pardon as Biden does not have the authority to do so. He said he is reaching out to the Governors to request their help freeing those convicted of simple cannabis use. Colorado Governor Jared Polis had this to say on Twitter:The pardon also does not cover people with federal convictions for other marijuana-related crimes like trafficking or people who were not in the U.S. legally at the time of their offense.Only those convicted before October 6, the day on record of his Pardon, will be eligible. His move on Thursday did not decriminalize the drug and it remains a federal crime to possess small amounts of marijuana on federal land, which still leaves many open to being arrested for possession charges.

Precedent of the Pardon – Does Biden have the Authority?

In somewhat the same way, this “Pardon all” story may take a while to play out fully since the power of the pardon is not all encompassing. For instance, could President Donald Trump, after his impeachment, pardon himself? The answer is no!  The impeachment would strip him of that power! There is precedent for Biden’s action, however many of his opponents are saying he doesn’t have the authority to pardon everyone.

But even so, the pardon power is one of the strongest unilateral authorities of the presidency, as show in these past examples  the power of the Pardon:

Jimmy Carter’s amnesty for Vietnam War draft dodgers1974 Gerald Ford preemptively pardoned Richard M. Nixon, who had resigned the presidency in the wake of the Watergate scandal (He receives backlash for the pardon called ” the most notorious pardon in history.”)In 1795 George Washington set aside the death sentences of two ringleaders of the Whiskey Rebellion.Thomas Jefferson made an “offer of pardon” to insurgents so  that it  “may restore the tranquility of the commonwealth.”Abraham Lincoln and Andrew Johnson both offered and issued conditional proclamations of amnesty relating to the Civil WarAnd more recently Barack Obama used his clemency powers to shorten more than 1,700 individual’s prison terms he thought were harshly skewed by mandatory minimum sentences that punished nonviolent crimes

Although some of these historical pardons are somewhat similar to Biden’s actions, the impact is quite massive. It’s the most significant step a U.S. president has taken to loosen federal marijuana laws, following the footsteps of increasingly more states that have moved to decriminalize marijuana in recent years.

This Pardon is a big story and it will be interesting to see what’s next! But for many users, it’s a hopeful happy time since the government that has jailed so many pot smokers since the war on drugs is finally trying to ‘do the right thing’ by pardoning them. This sets in motion the decriminalization of cannabis as a schedule 1 hard drug when all the facts show it is not. In the meantime, many people get their ‘get out of jail free card’ and should be celebrating, but not on federal land yet!